Above: The fire burns along Atlas Peak, east of Yountville and north of Napa. Below: the pin drop marks the location of Atlas Peak.

Below: Fires rage from Santa Rosa on the west to east of Napa. 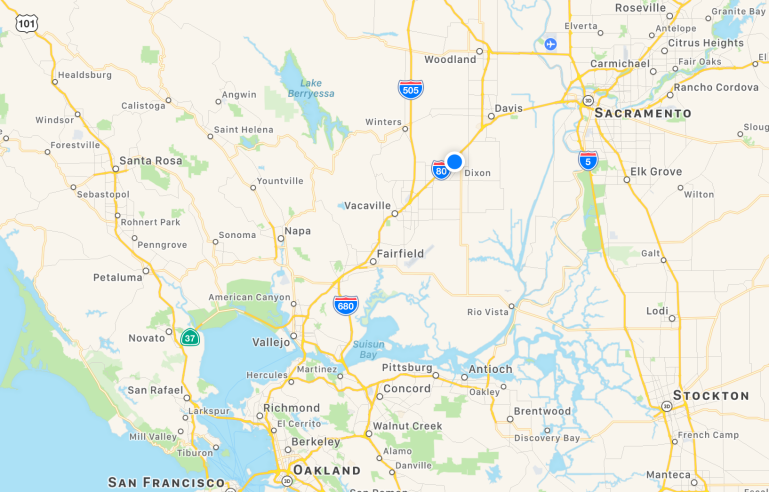 A total of 17 major fires are burning in California, 15 of them in the Napa and Sonoma Valleys and reaching into Mendocino and Yuba Counties. Running from Santa Rosa on the U.S. 101 corridor on the west, the fires have covered ground all the way east to Fairfield on the I-80 corridor to the east. Two days ago, the fire came over the ridge of mountains that form the eastern side of the Napa Valley and then down into parts of Fairfield. Homes in the north east side of Fairfield and in the rural areas between the city and the mountains were evacuated. The danger to Fairfield now seems to have passed as the winds shifted Thursday night.

The California fires have scorched more than 220,000 acres – 330 square miles. More than 10,000 firefighters are battling the blazes. Among the firefighters are 4,000 from the National Forest Service. As of Thursday, it was reported that 550 fire trucks were fighting the fires, but Thursday night, I saw a large number of U.S. Forest Service fire trucks moving west on I-80, no doubt heading to the Napa and Sonoma fires, so the total number of fire trucks is likely well over 600 now. Hundreds of bulldozers have been pressed into service to combat the flames.

The high winds have hampered the ability of aircraft to fight the fires. Wednesday, the thick smoke hampered visibility to the extent that fixed wing aircraft could not operate against the fires, but there were some helicopter assaults on the flames. 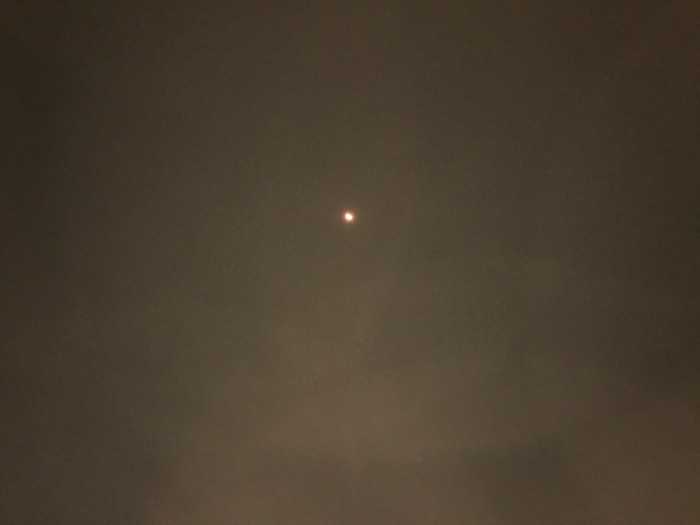 Smoke from the Wine Country fires obscured the noon sun on Wednesday
in Dixon, CA.

Earlier in the week, the smoke was blowing east, obscuring the sun in the city of Dixon where I live. Then the winds shifted and the smoke is drifting to the San Francisco Bay Area where it has disrupted flight operations out of San Francisco and San José airports. On Wednesday, 80 flights were cancelled out of SFO and many others were delayed out of both SFO and San José.

The entire town of Calistoga was evacuated and a massive effort by the fire crews has – so far – saved the town.

Above: the city of Calistoga has thus far been saved. One of California history’s greatest characters gave Calistoga its name. Sam Brannan, who once owned most of the town, was asked what he planned to do with his northern Napa property. He intended to make it the Saratoga Springs of California, but with his diction slurred by alcohol Brannan replied, “I’m going to make it the Calistoga of Sarafornia!”

Above: A helicopter drops retardant on the fire near Calistoga. Below: Cities from all over northern California have sent people and equipment to assist in the fire zones. Here Oakland police guard Highway 29 out of Calistoga going toward Lake County. Lake County had horrific fires in 2015 and 2016. 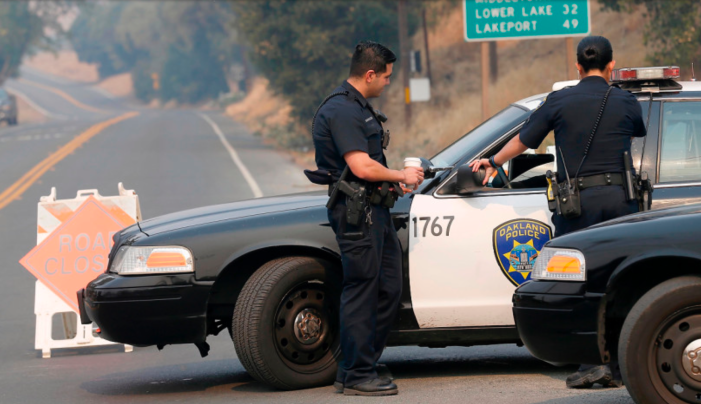 Above: the fire works its way through a vineyard near Calistoga. Below: another helicopter doing battle against the fire at Calistoga. In Sonoma, South and east of Calistoga, the story is different. Overcome by high winds Saturday, fire crews in and around Sonoma were unable to stop the advance of the fire and many homes have burned. Thus far, Mission San Francisco de Solano, the last church of the famous California Mission Chain that stretches from San Diego to Sonoma, has been saved. This church was built in 1823. Above: the old Sonoma County court house, guarded by a fire crew Saturday morning 14 October 2017. Below: a photo taken before the fires of Mission San Francisco de Solano in Sonoma. The mission church, the last of the famous California Mission Chain, is one block from the court house shown above. 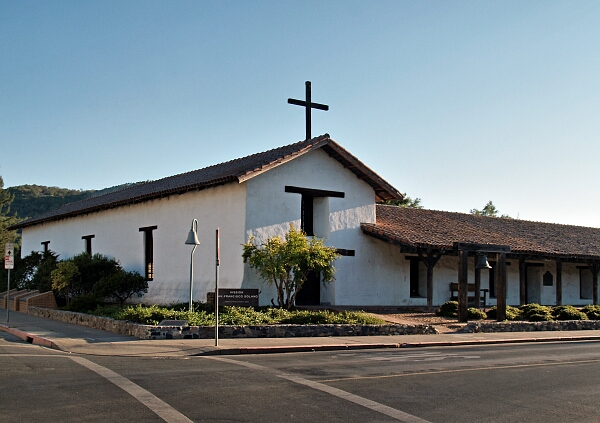 Above: a hotel burns in Sonoma.

As of this writing 40 people have died. Thousands of missing-persons reports have been filed in the chaotic aftermath of the fires, but many of those people have been found unharmed. Napa County officials said Saturday that 74 people were still unaccounted for, and in Sonoma County the total was 223.

There have been amazing stories of heroism but the dark side of human nature has been on display as well with looters trying to take advantage of the situation. Earlier in the week, an arsonist was found trying to light an additional fire near Santa Rosa. He was run off but not apprehended.

Above: northwest of Sonoma along Highway 12 is Kenwood where this home is burning. Below: this Kenwood home was spared but the two cars and garage were not. 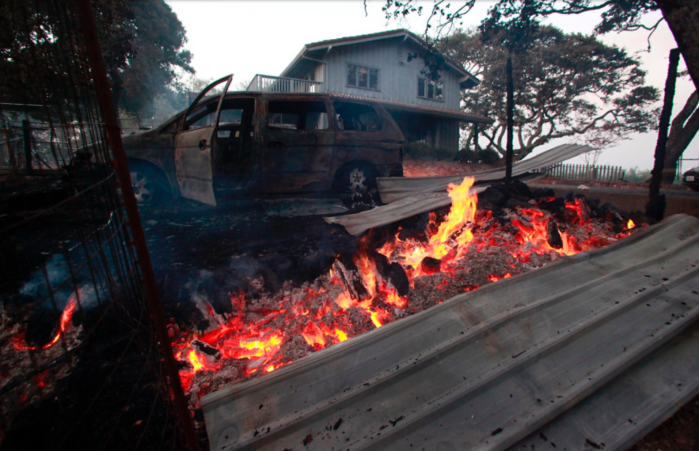 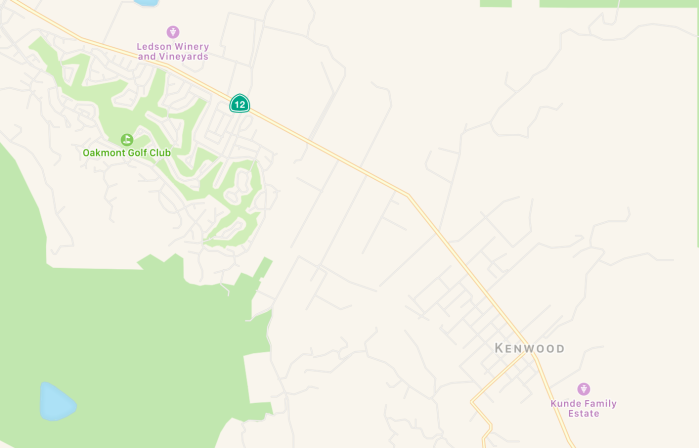 Above: Kenwood is located off of Highway 12 between Santa Rosa and Sonoma. Note the Oakmont Golf Club in the upper left of the image. This well-to-do retirement community has suffered greatly in the fires.

One couple tried to escape in their SUV, but were forced to turn back because of the fire. They decided the safest place to be was in a swimming pool. Not having a pool of their own, they  jumped into a neighbor’s swimming pool – that neighbor was 1/3 of a mile from their own home but was the nearest neighbor with a pool. Their house and the neighbor’s house both burned to the ground. By staying in the cold water of the pool for 6 hours, they survived, but suffered from a bit of hypothermia. How ironic to be surrounded by that huge fire and suffering from hypothermia! They breathed through wet t-shirts while in the pool. The woman put her shoes and cell phone at the edge of the pool. The fire melted her shoes and phone, but she still had hypothermia!

Another couple jumped into another pool. Their story had a tragic ending as the woman was overcome by the smoke and died, but he survived.

Two women survey the burned out ruins of their Napa neighborhood.

Teams from various Coroners Offices are searching ruins with cadaver dogs. In the Oakland hills fire in 1991, the fire was so intense that several people were incinerated, leaving only ashes. It is highly likely that there will be instances of that in this group of fires.

Saturday, the winds blew the fire back into Santa Rosa residential areas. More than 2,800 homes have burned in Santa Rosa. The home and studio of the late cartoonist Charles Schulz, creator of the “Peanuts” comic strip,  was in Santa Rosa and burned earlier in the week. Schulz’s widow, Jean, still lived in the home. She escaped. In the 1970s, Schulz lived and worked in nearby Sebastopol and lost that studio in a fire.

The Santa Rosa home and studio of the late creator of “Peanuts,” Charles Schulz, was burned last week in the fire. Saturday, the fire turned once again to Santa Rosa after burning more than 2,800 structures in the city earlier in the week.

The wine industry constitutes a huge portion of the Napa and Sonoma County economies. The fires have destroyed 16 wineries and many more have been damaged. Most of the 2017 harvest was in, but late harvest grapes that weren’t burned will be useless because the grape juice will taste of smoke. Dairy farming is another important component of the Sonoma County economy. I haven’t seen any reports of the impact of the fires on dairy production thus far.

A week into this disaster, it seems the most likely cause is power lines that were downed in the high winds of Saturday night and Sunday morning a week ago. There is a lot of combustable material for the fires to feed on. Five years of drought ended last winter when many areas of California got as much as 90 inches of rain over the winter rainy season. In California, the rains typically fall (roughly) between Thanksgiving and Easter. It is rare for rain to fall after the end of Spring. With last winter’s abundant rain, there was abundant vegetation growth. In the dry summer and fall, much of this vegetation turned into tender that is now feeding the flames.

Governor Jerry “Moonbeam” Brown has blood on his hands as result of this disaster. The Democrats have a super majority in the California legislature and are passing horrible legislation such as a bill passed last week that Governor Moonbeam signed legalizing child prostitution in California. Anthony Weiner and Roman Polanski, call your offices. In 2016 one of the few rational things the legislature has done in recent years was to pass an emergency bill that was designed to modify the power grid to help prevent power lines being blown down in high winds and touching off fires. Governor Moonbeam vetoed the bill. This, ladies and gentlemen, is what happens when you give Democrats unchecked power to run your state …

Above: only a swimming pool remains of a triangular-shaped apartment complex off of Old Redwood Highway in Santa Rosa. Homes and buildings across from it burned also. In the upper right of the photo is Cardinal Newman High School which was largely intact when this photo was taken but has since burned to the ground. Below: Santa Rosa has been the object of much of the wrath of the fires in Northern California. This map gives context for some of the photos seen here of the destruction in Santa Rosa.

Above: Looking like it has been bombed, the burning ruins of Keysight Technologies, Santa Rosa. Below: another view of the destruction of the Coffey Park area in Santa Rosa.

Below: across U.S. 101 east and north of the Coffey Park area shown above is Mark West Springs Road. Shown here is a burned out housing development along that road.

Below: In the hills east of U.S. 101 above Santa Rosa was Paradise Ridge Winery. This is what is left. The winery had been a popular venue for weddings. 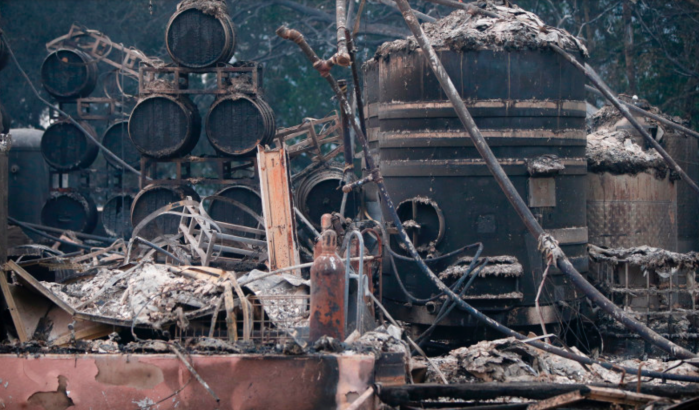 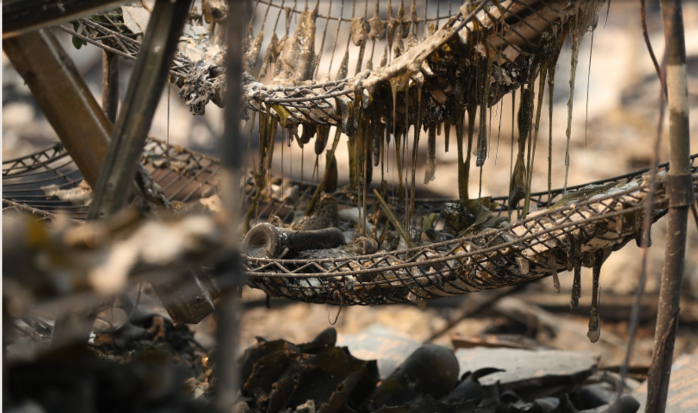 Below: burned out cars at the Regasi Winery.

Above and below: Chateau St. Jean Winery, Kenwood 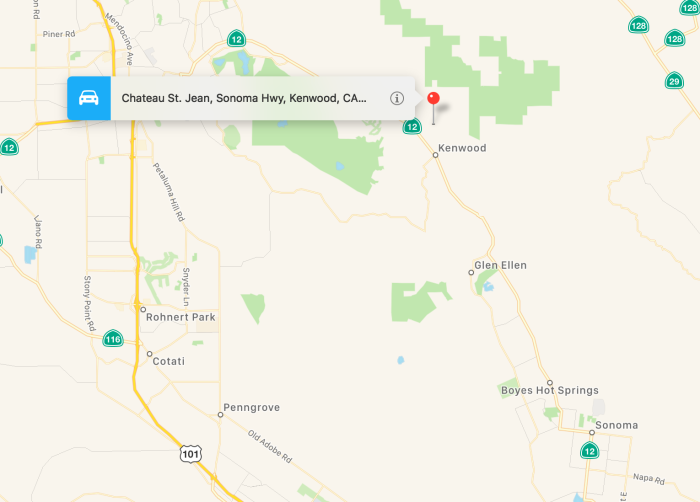 Above: fire approaches Gundlach-Bundschu Winery, founded in the 19th century and one of California’s oldest wineries. This winery was saved. Below: now, in closing: