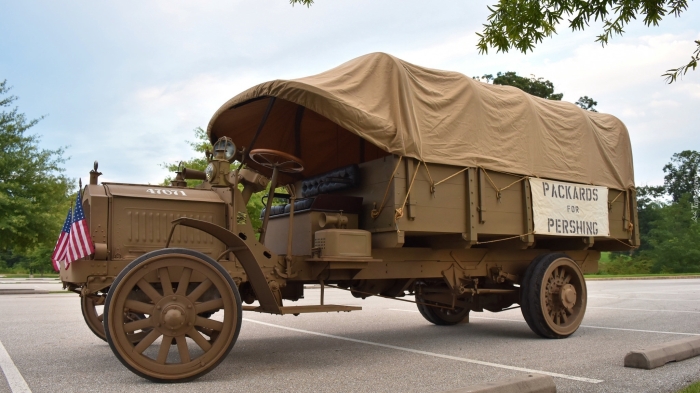 “Packard Truck Dave” reports on his weekend at the Army Heritage & Education Center in Carlisle, PA:

“The US Army Heritage & Education Center in Carlisle, PA held their ‘US Army Heritage Days’ on May 19 & 20. Due to heavy rain I did not take the 1918 Packard out to the event. I was given space inside for a WW-I display. However, the weather finally cleared up Sunday afternoon. Army tank demonstrations on an awesome obstacle course were held on both days regardless of the weather at 2 PM.

I attached a couple pictures (below. The first one is of both of my friend Frank Buck’s Sherman tanks – Frank has an absolutely amazing collection of WW-II vehicles. Frank is the fellow on the top of the tank to the left. His son Adam is in WW-II ‘Tanker Gear’ standing in front. This picture was taken Saturday. I am awaiting the Sunday pictures when I rode on the tank on the right with the 90 mm high velocity cannon…. It has a Russian diesel – the tank was bought surplus from Czechoslovakia by Frank. Originally sold as surplus to the Czechs after WW-II. However during the ‘Cold War’ the US was not about to send spare engines/parts so a conversion to Russian diesels was done by the Czechs. The engine on our tank stalled on our 4th circuit of the obstacle course – the Sherman pulled it and eventually pulling it got it started …..The attached second picture is of Frank Buck’s M-4 Sherman tank was taken on Saturday – the mud was flying! What an experience! I loved it! And there was no muffler on them – straight pipe exhaust!

On Sunday I was minding my own business as a spectator behind a well defined orange safety fence to the outside tank demonstration – just watching. The weather had dramatically improved & I was taking a break from my indoor WW-1 display.

Frank had both of his Sherman tanks present on both days. From atop his M-4, Frank motioned for me to climb up on the TD – which after a little encouragement I did. Awkward and with a total absence of coordination/grace, I stumbled and pathetically tried to – and eventually succeeded – to climb up on the TD – and accompanied the other crew members as the TD performed awesome maneuvering on the obstacle course – as I hung on for dear life – atop the tank.

Frank and his son Adam fully documented my painfully awkward & time consuming ascent onto the TD – as well as my equally non-professional/klutzy descent at the end of the trip – and I will gladly share their photographic skills when I receive those pictures (after HEAVY censoring!) All hands on the ground (Safety Folks) from AHEC helped immensely as did Ed Smiley, Franks’ tank driver. That tank ride was truly the highlight of my weekend if not 2018 to date! 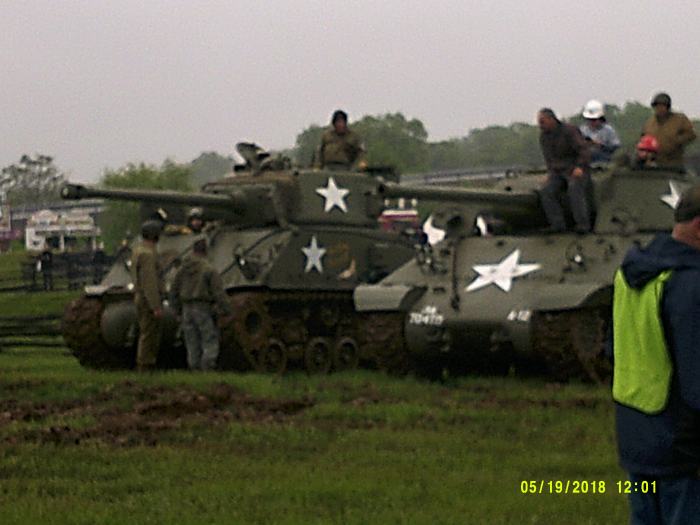 Hemmings via the Detroit “Freep” supplies us with this photo of a rare
Ford Pinto Mussel Car:

“B-Squared” weighs in with this photo of a Gilmore station in San Diego, CA circa 1941. Mopar fans, is that a ’39 Plymouth?