By Sasha Hadzik in Serbia.

Thanks to Packards International for permission to post this story.

“Tito was very powerful and had a lot of luxury limousines like three long Pullman Mercedes 600 half open cars specially designed for him. But he had a special affinity for the Packard brand.

I hear from older people that Tito used this Packard during the Summit for Non-aligned Nations and other events, for his guests such as Indira Gandhi, to show them around town.

After Tito’s death in 1980, the car was donated to the Macedonian government. Later, they sold the car to Montenegro where it was used at the airport to tow gliders into air.

My Father’s friend Majo is from Niksic-Montenegro and remembers that time….He helped my Father find and buy this Packard in 1985 from a collapsed garage and saved it from waste.

I have some photos from the restoration time and from my wedding to Branka.
Today, as a convertible, the car is popular for publicity and photo shoots like this occasion for a Czech soft drink advertisement.”

Marshal Josip Broz Tito, Communist President of Yugoslavia, and 1st Secretary-General of the Non-Aligned Movement, was born as Josip Broz on 7 May 1892, in the village of Kumrovec, in what was then the Austro-Hungarian Empire (present-day Croatia). He was the seventh of 15 children born to Roman Catholic peasants.

Josef Broz, aka Tito, (1892-1980) Yugoslavia’s President for Life, a new title which he conferred on himself, is walking alongside his 1948 Packard Super 8 Convertible. Note that the top is not completely lowered and that there are no barricades to keep the peasants in their place. Also it seems unusual that an Emperor would walk in a parade instead of ride…especially in a Packard. Interesting guy, would fit our description of a “Car Guy,” in his youth pre-WW I, worked as a laborer in various car factories—Skoda, Benz, Austro-Daimler where he drove and tested the cars. Photo taken somewhere in Montenegro during a good-will visit by Tito.

(Above and below) January 2019. Fully restored 1948 Packard Super 8 Convertible, originally owned by Yugoslavian President Josef Broz Tito, on the set of a TV commercial shoot in front of the White Palace at Belgrade, Serbia. The Palace was the residence of the King before WW II, later it belonged to Tito; now the Prince’s residence.

1998: Sasha Hadzic, son of Sait Hadzic who bought the car in 1985, marries Branka and parades boldly through town in the Tito Packard with the media in full attendance. Twenty One years older now, Sasha is also the author of this story. 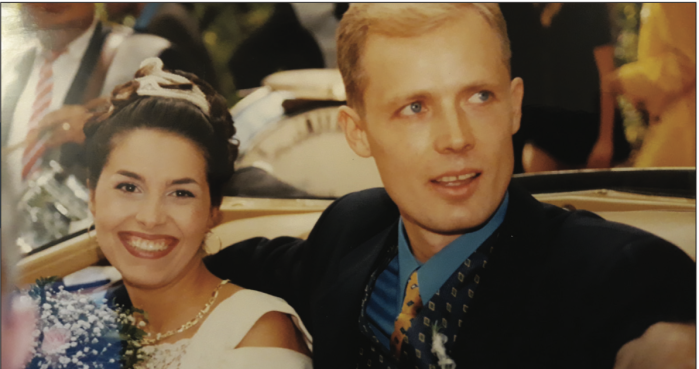 A Mobil station with a ’55 Ford nearby.