Hat tip to “B-Squared” for inspiring today’s post.
Text and some photos adapted from Silodrome and from Coachbuild. Additional sourcing from Supercars.net. The story of the 1954 Jaguar XK120 Supersonic begins in Italy where one of Ghia’s designers, Giovanni Savonuzzi, sketched out what would become the prototypical Supersonic design. He built his own chassis using a FIAT 1400 front axle with the rear axle coming from a Lancia Aurelia. The engine was an Alfa Romeo 1900 that had been tuned by racing driver Virgilio Conrero. Ghia crafted the body for Savonuzzi’s Supersonic in metal.

The car, labeled as an Alfa because of its engine but not officially an Alfa project, was entered in the 1953 Mille Miglia. Unfortunately, the car didn’t cross the finish line – it crashed and burned. Conrero restored the chassis and re-bodied it with a barchetta style body.

The Alfa-engined Supersonic at the 1953 Mille Miglia

Savonuzzi’s one-off Alfa Romeo-engined design caused a shockwave that was felt around the world. The car is now widely remembered as one of the most significant “jet age” designs of the 1950s. Savonuzzi named the design “Supersonic” as a hat tip to the burgeoning world of supersonic flight. 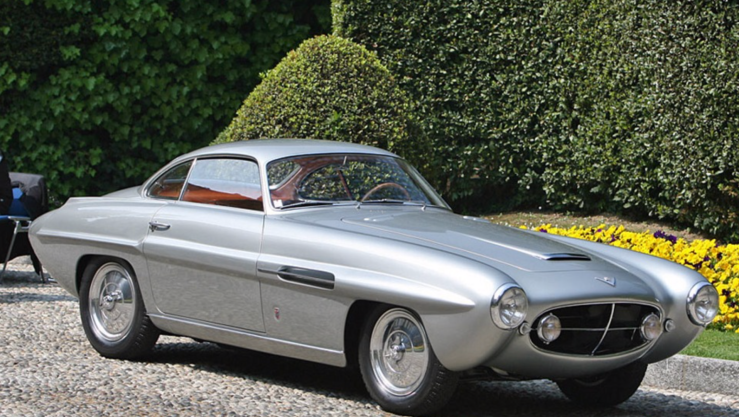 The FIAT 8V platform was chosen for the base of the production version, almost certainly because of its relatively cheapness compared to similar chassis from Alfa or Maserati. Fifteen of these FIATs received Supersonic bodies built by Ghia. Ten of them are known to exist today. The fate of the remaining 5 is unknown. They are either wrecked, scrapped or sitting in a barn somewhere waiting to be found by a lucky pilferer.

Carrozzeria Ghia was founded by Giacinto Ghia in Turin in 1919 and soon established a reputation not just for luxury coachwork but also for bodying competition cars. Despite its founder’s death in 1944 and wartime damage to the factory, Ghia resumed its place at the forefront of Italian coachbuilding after World War II, providing the training ground for many of Italy’s rising-star designers: Michelotti, Boano, Frua and Savonuzzi all making a contribution to its continuing success. Ghia has collaborated with many of the world’s leading car manufacturers, producing memorable models such as the Volkswagen Karmann-Ghia, Lancia Aurelia B20 and FIAT 1500 and 2300 Coupes. 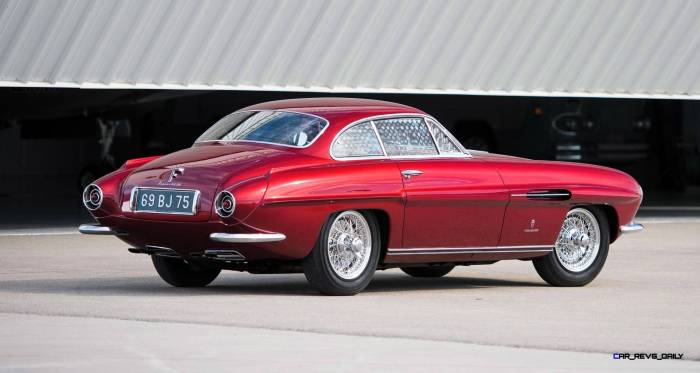 French Jaguar importer Royal-Élysées contracted Ghia in 1954 to fit Jaguar XK120s with Supersonic bodies. The red Jaguar shown here, chassis 679768, benefitted from a revised cylinder head allowing for three Weber carburetors to be fitted in place of the standard twin SU carburetor configuration. The engine modifications were done by Virgilio Conrero, who had tuned the original Alfa-engined Supersonic. Conrero’s carburetor modification saw horsepower at the rear wheels climb from 160 to 220 – making this Jaguar one of the fastest motor cars of the day. The second car was finished in blue. Both of these Jaguars were sold to a Lyonnais businessman, a Monsieur Malpelli. 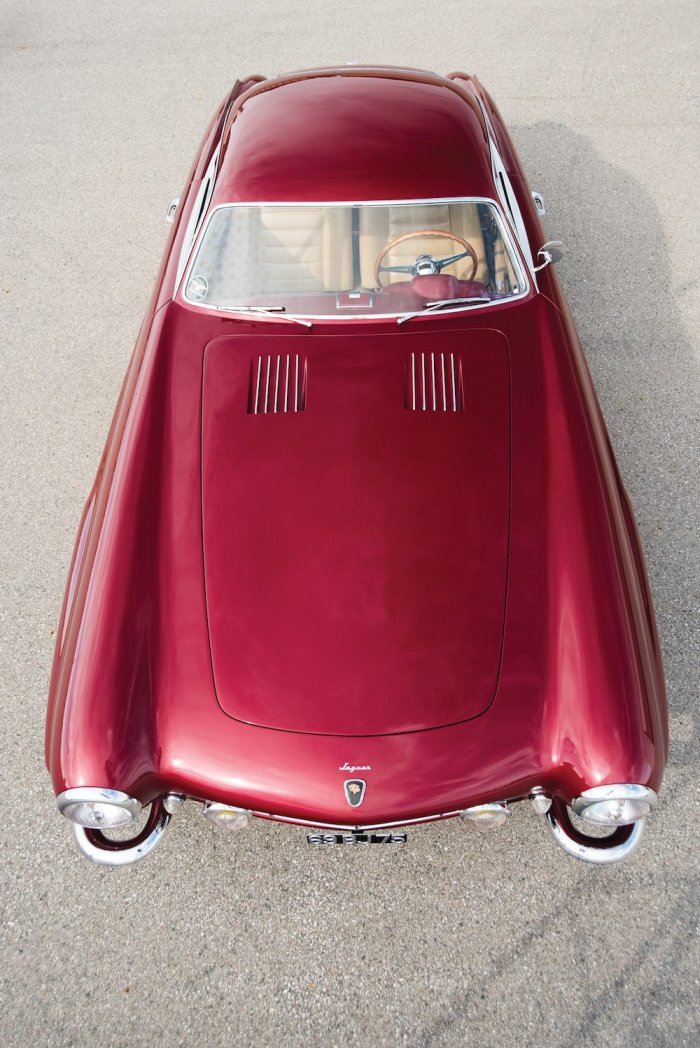 There are detail differences between the bodies and engines of the red and the blue XK120 Supersonics – compare the grille designs, for one example. The blue one has a hood scoop, the red one does not. The blue one has standard issue SU carburetors while the red one is fitted with 3 – 2 bbl Webers. 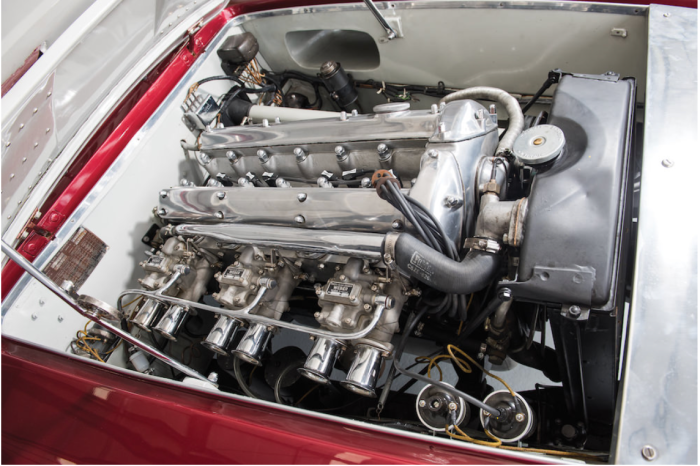 The blue ex-Malpelli XK120 still resides in France. There are stories that Royal-Élysées ordered a third example. If so, its whereabouts are unknown.

The “F” indicates French registration, the “75” in the license plate tells you the car is registered in departement 75, Île-de-France: Paris.

After completion, ‘679768’ was exhibited at the Paris and London Motor Shows in 1954 and took part in the Concours d’Elegance competitions in Montreux and Cannes. Originally registered with the license plates ’69 BJ 75′ and subsequently with ’66 BJ 75′ (the ’75’ in the license plate indicating that the car is registered in departement 75, which is Paris.  This car was retrieved by Royal-Élysées following the disappearance of the mysterious Malpelli, and remained with the company until 1969 when proprietor Charles Delecroix ceased importing Jaguars. When Royal-Élysées closed, the Supersonic was bought by Philippe Renault (yes, that Renault) and subsequently sold by him to Roland Urban, who displayed the car at his motor museum devoted to special-bodied Jaguars in Montlhery.

Following completion of a no-expense-spared total restoration undertaken with the assistance of marque specialists Atelier Sontrop of Pourrain, the Supersonic won 1st prize at the prestigious Louis Vuitton Concours at Parc de Bagatelle, Paris in September 1996. There are bills totalling circa FF240,000 for this restoration work in addition to Atelier Sontrop’s invoice for servicing in 2005. Since restoration the car has covered only 10,000-or-so kilometres.

It’s difficult to look at the Jaguar XK120 Supersonic and not be slightly taken aback by its beauty. This is one of the finest designs from the golden age of automobile design. 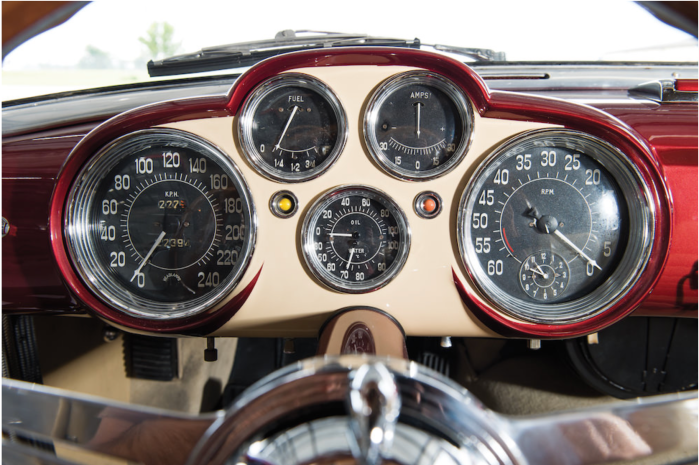 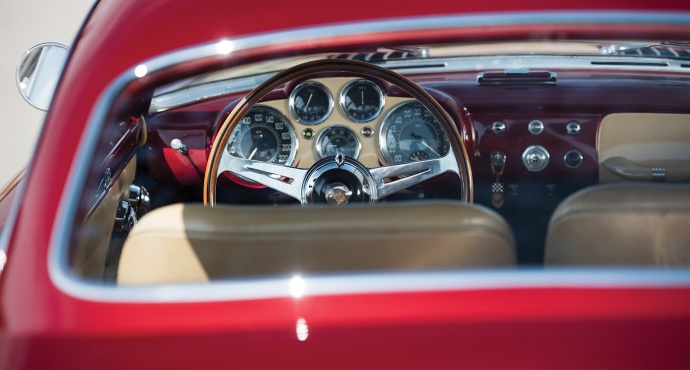 Bring A Trailer has hosted an auction (ending today) for a 1952 Ghia-bodied Ferrari once owned by Juan Peron. The ex-Peron Ferrari was based on the 212 chassis, of which 80 examples were built. This example features one-off coachwork from Ghia intended for display at auto shows. Peron acquired the car, leaving it behind when he fled Argentina in 1955, ousted in a military coup. From the front, this car seems ham-fisted and heavy. Originally painted red and black, the current “Halloween” colors do the design no favors. The awkward uptick of the black paint at the rear fender seems to be poorly executed. The design comes off better in the rear 3/4 view. Two cars built with Ghia bodies in the same time span but with very different results: the Ghia-bodied Ferrari and the Ghia-bodied Jaguar XK120 Supersonic. 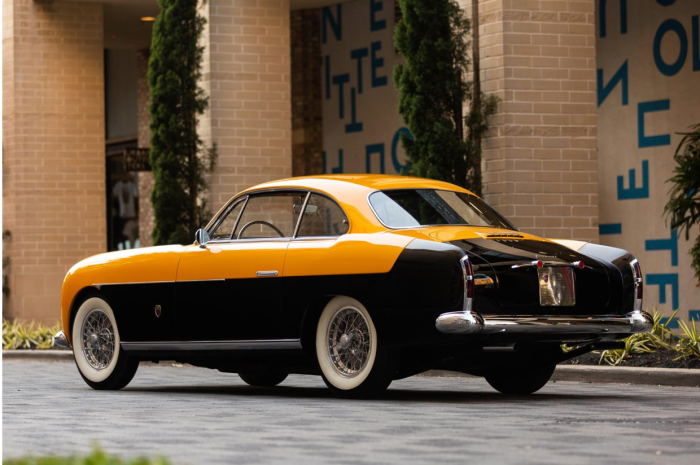